Why did Moses not enter the Promised Land? 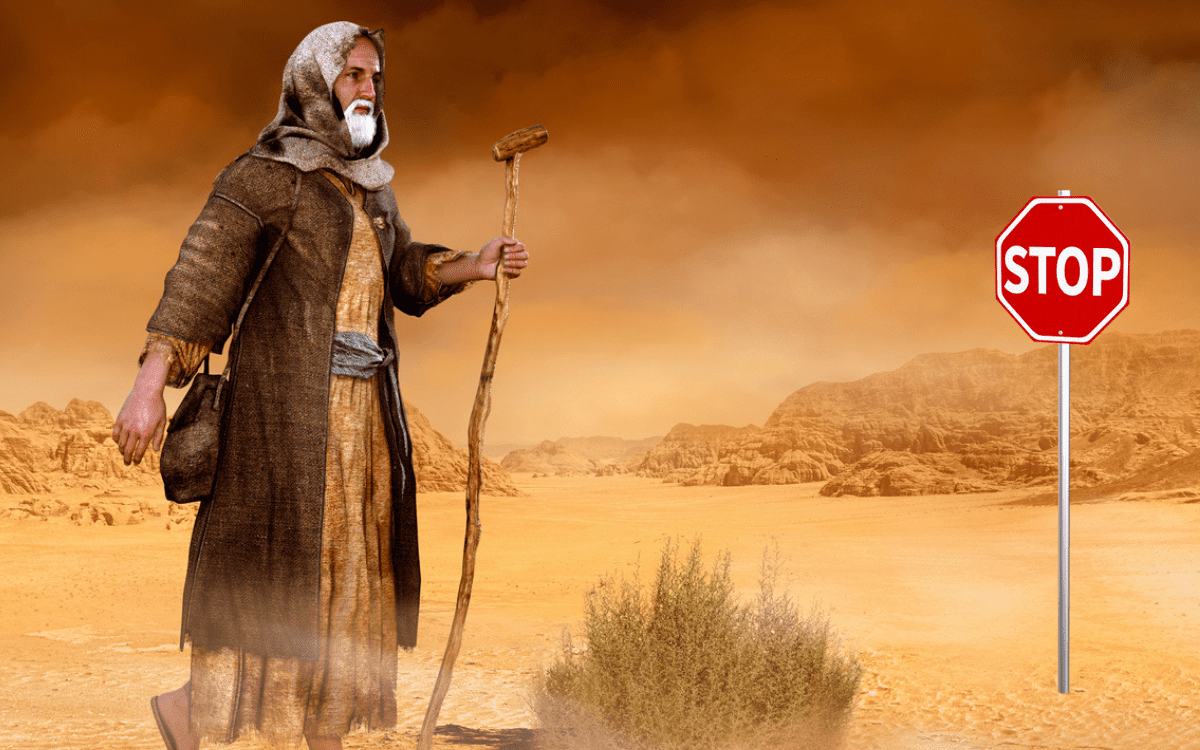 Why did Moses not enter the promised land with his people?

Imagine leading a group of people through the wilderness for decades only to not be allowed to reach the intended destination.  This is exactly what happened to one of the Bible’s greatest heroes, Moses.  This article will explore why he and Aaron (everyone forgets Aaron) missed the opportunity to continue on to the land of milk and honey.  Why did Moses not enter the promised land?  The quick answer is a lack of faith but it’s important to look at the whole story.

At some level, every time we fall as humans it is a faith issue.  But, understanding the steps that actually got us into the trouble is helpful.  So why were Moses and Aaron punished?

In both Numbers 20 and in Deuteronomy Chapter 32, we find the Almighty Father stating that Moses had “broken faith” with God “in the presence of the Israelites.

This is because both of you broke faith with me in the presence of the Israelites at the waters of Meribah Kadesh in the Desert of Zin and because you did not uphold my holiness among the Israelites. Therefore, you will see the land only from a distance; you will not enter the land I am giving to the people of Israel.”
Deut. 32

The charge comes from an incident Meribah Kidesh in the Desert of Zin.  After 40 years of wandering and God providing every step of the way, they faced a situation where water was scarce.  The Israelites became angry and turned on both Moses and Aaron.

There was no water for the congregation, and they assembled against Moses and Aaron. Then the people argued with Moses and spoke, saying, “If only we had perished when our brothers perished before the Lord! Why then have you brought the Lord’s assembly into this wilderness, for us and our livestock to die here? Why did you make us come up from Egypt, to bring us into this wretched place? It is not a place of grain or figs or vines or pomegranates, nor is there water to drink!
Numbers 20:2-5

This was a routine that was all too familiar and extremely frustrating for Moses.  A near identical account takes place years prior in Exodus 17.  The two are so close that many wonder if the account in Exodus and Numbers are the same incident, but they are not.  First, here are the differences.

Both cases are similar in that the people lack water.  The community turns on Moses and Aaron.  They complain and question why they were ever taken out of Egypt.  God eventually quenches their thirst by producing water from a rock.  This provision did not come without a cost.  The Israelite’s lack of faith would bring them delay and for their leader, we find several mistakes that led to why did Moses not enter the promised land.  The sad part is we know that God would have provided no matter what!

So Moses took the staff from before the Lord, just as He had commanded him; and Moses and Aaron summoned the assembly in front of the rock. And he said to them, “Listen now, you rebels; shall we bring water for you out of this rock?”  Then Moses raised his hand and struck the rock twice with his staff; and water came out abundantly, and the congregation and their livestock drank. 12 But the Lord said to Moses and Aaron, “Since you did not trust in Me, to treat Me as holy in the sight of the sons of Israel, for that reason you shall not bring this assembly into the land which I have given them.”
Numbers 20:8-12

Did You Know Segment | Jan 24, 2021  “Why did Moses not enter the promised land?” – Evangelist Jason D’Ambrosio

If you read the similar incident in Exodus, you can certainly understand why this must have been very irritating for Moses.  He watched God continuously provide and with every problem, they seemed to abandon all memory of God’s goodness.  You can tell that he was at the point where he wanted to say “enough is enough”.  While frustration wasn’t the sin here, it certainly set the stage for some critical errors that led to why did Moses not enter the promised land.

Takeaway: When we let frustration get the best of us, we lose focus. In the midst of being in our fleshly feelings, we tend to either forget or abandon God’s instruction.  A frustrated leader almost always struggles to effectively guide those who follow them. 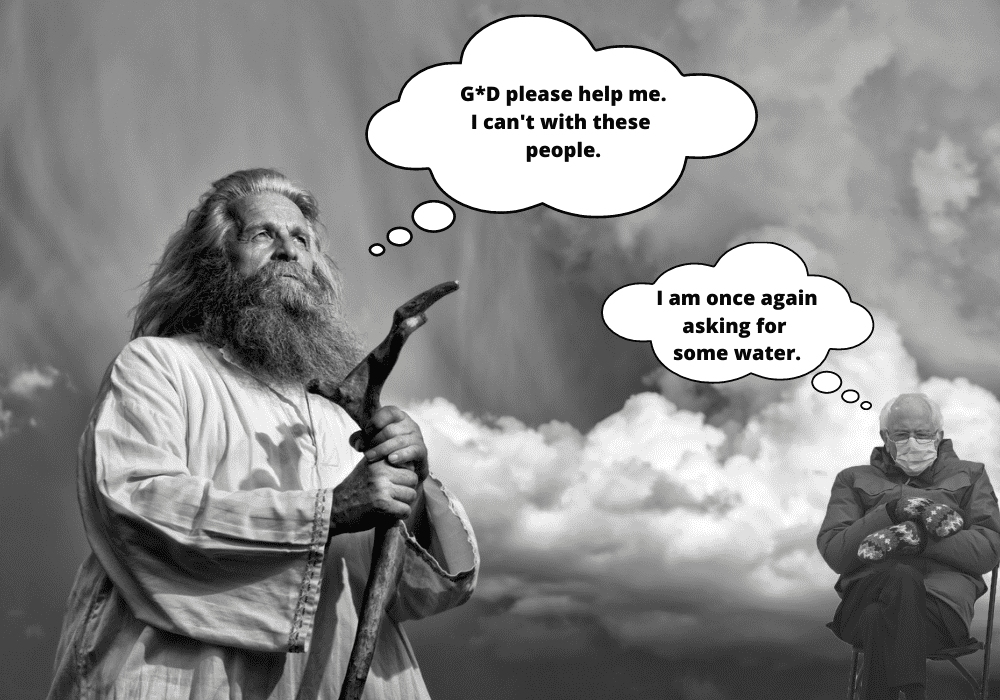 God instructed Moses in Numbers to “speak to the rock” to draw the water.  The Prophet instead strikes the rock twice and water flows out abundantly.  The community probably felt like the mission was accomplished, but this was a big mistake.

In the first incident recorded in Exodus, the Israelites are belligerent and God told Moses to strike the rock for water before naming that place “Massah”.   Massah means “testing”, because Israel tested God, questioning His promises, love, and provision.

The link to Jesus’ temptation in the wilderness

When Jesus was tempted in the wilderness, He reminds satan of an ancient scripture about challenging God.

Then the devil took him to the holy city and had him stand on the highest point of the temple. If you are the Son of God,” he said, “throw yourself down. For it is written: ‘He will command his angels concerning you, and they will lift you up in their hands, so that you will not strike your foot against a stone.’  Jesus answered him, “It is also written: ‘Do not put the Lord your God to the test.”
Matt 4:5-7

Jesus, unlike the Israelites, had no interest in trying to force God’s Hand to prove His protection.  He invokes these words of Moses from Deuteronomy chapter 6.

Do not follow other gods, the gods of the peoples around you; for the Lord your God, who is among you, is a jealous God and his anger will burn against you, and he will destroy you from the face of the land. Do not put the Lord your God to the test as you did at Massah.
Deut 6:15,15

In Deuteronomy 6, Moses reminds Israel that God is a jealous God and of the time they tested.  Unfortunately, like many of us, they did not learn from their past mistakes.

So, when they come to Moses again, grumbling and doubting that God would provide.  God tells Moses to speak to the rock.  Instead, Moses goes with the previous plan and strikes the rock.

Water from a Stone | Strike vs. Speak

A Type and shadow of the Messiah

The manner in which Israel received water from the rock was also a type and shadow of what was to come through Jesus.  The rock symbolized Jesus, the Rock, Whom out of which we partake of the Living Waters, forever and ever.

Jesus only needed to be struck (crucified) once!  The power of that sacrifice continues forward, unlike the temple sacrifices that needed to be repeated over and over.

Paul solidifies this in 1 Corinthians 10:1-5 when he makes the direct comparison between Jesus and the Rock in the Old Testament Scriptures and in Hebrews 7:27 when He reminds them that the Savior was the final sacrifice that covers all.

There are several takeaways from this 2nd reason why did Moses not enter the promised land.

Takeaway: Listen to what God wants you to do in this next season of your life!  Like Moses, you may have frustrating problems that resurface.  There’s a good chance that as you get closer to your promised land, God may switch up the game plan.  Even what worked in the past, may not be the best way to go forward.  Seek God and be obedient to the new strategies He lays out for solving old problems.

In the case with Moses, he didn’t need to strike the stones and perform a physical act.  He only needed to speak to the rock.  It’s the same for us today.  Jesus did the physical work.  Now all we have to do is use our words by praying to Him and using the authority He has given us to command our victory.

Why did Moses not enter the promised land?  Our 3rd reason is equally as important as the first 2.  Before mistakenly striking the rock, Moses makes an unfortunate statement.

So Moses took the staff from before the Lord, just as He had commanded him; and Moses and Aaron summoned the assembly in front of the rock. And he said to them, “Listen now, you rebels; shall we bring water for you out of this rock?”
Numbers 20:10

Moses says before all the Israelites “we (he and Aaron) shall bring water for you”. Humans do not draw water from rocks.  Only God can do this.  By not giving God the glory in the moment, Moses and Aaron sealed their fate.

This is not because God needs our accolades, but understand that when we don’t properly acknowledge God’s role in our life, we are doomed to believe that we achieve our greatest accomplishments by our own power alone.  It’s this lack of humility that will make us fall short.  Your ability will only take you so far.  What God has for your life is going to require His divine intervention.  Not being able to identify where your weaknesses end and His strength begins is a recipe for failure.

If an example was not made for all Israel to see, it could have proven fatal for God’s people as they went forward.  The Israelites continuously put their trust in man over God. Moses made the mistake of reinforcing that when he took credit.  When Israel saw why did Moses not enter the promised land, they knew that it was God Who ultimately made it happen, not their leader.  An example had to be made.

Takeaway: Don’t put all your trust in man.  God will put people in your life to guide you, but ultimately it’s by His grace that you will enter into everything that He promises for your life.  Also, don’t take undue credit.  Even when you are called to led others, you will achieve your highest levels when you acknowledge that He is the Ultimate Guide Who makes the way for your success.

Did this article add to your knowledge on why did Moses not enter the promised land? We want to hear from you!

Can you lose your salvation?

How did Judas die?

Jason D'Ambrosio
Jason Koch D'Ambrosio is the Evangelist and Leader at Sound of Heaven Church. He is deeply involved in community initiatives and outreach on Long Island and passionate about preaching and teaching the Gospel.
PrevPreviousBeelzebub
NextDeliverance for the 21st Century Church | Apostle Johnny OvaNext